Vorig bericht
Slug Comparison – When You Were Living Here
Deel 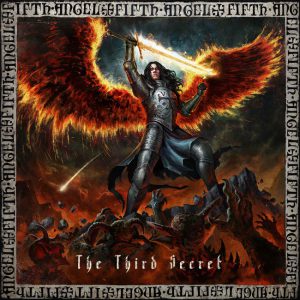 Ken Mary: “‘Stars Are Falling’ is a song that will probably have different meanings for different people. Lyrically I don’t want to get too specific as again, I believe different meanings will be found by different people and I don’t want to ruin that for them. But the overall idea is that there is this race of life that we’re all in…where we strive, we fight, we struggle, and we depend on the fact that the sun will rise and that tomorrow is going to be here one way or another. There’s a time where that may not be the case; whether that’s on a global level or on a personal level. So really it’s a song to ponder some of the deeper meanings of life, actually. And with that I believe I’ve said enough, lol!”

“Kendall is a brother and will always be a part of the FIFTH ANGEL legacy. However, if we are going to be honest, he has chosen a path that has left the band, the fans, our label Nuclear Blast, and our promoters in a very difficult situation. He decided that rather than fulfill the commitments that were already in place, he would leave the band with short notice, making it very difficult for the band to find a suitable replacement.”

“After the success of »The Third Secret« the timing is again difficult to understand. In an email to the band, Kendall Bechtel stated that the paths of FIFTH ANGEL and he were “incongruent” and that he wished the band well. We feel that Kendall’s actions speak for themselves, but nonetheless the band will be fulfilling its commitments. As a band we feel we had success and made great albums before Kendall, and we hope to have the opportunity to continue doing so in the future as well.”

“In regards to the business at hand, filling in on guitar will be the incredible Ethan Brosh from ANGELS OF BABYLON. Also, we always intended on having an additional singer handle all of the material from the first two albums, and a singer that sounds more like original vocalist Ted Pilot. The singer for Metal Assault will be Steven Carlson, another Seattle native now based in Phoenix, who will now cover vocal duties on the three new songs in the set from »The Third Secret« album as well as the first two albums. It is our sincere desire to play the music of FIFTH ANGEL with as high a level of excellence as possible, as it is our goal to leave the fans with an amazing live experience. We will do our very best to make that a reality, and we look forward to seeing you all very soon!”