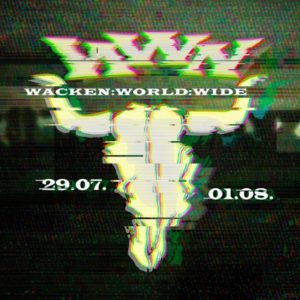 “This is made possible by our partners Telekom with Magenta-Musik-360.de and Bitcasino.io, but also by you, the audience – because to cover our costs, we have also created an extensive merchandising collection for Wacken World Wide. Every purchased wristband, souvenir ticket or t-shirt helps us to bring the event live on the virtual stage.

And a lot happens on this stage! The biggest mixed reality show in the world is headed by bands like Sabaton, Blind Guardian, Heaven Shall Burn and Kreator. These bands will play concerts just for you at a secret location, and the shows we will be broadcasted all over the world for free. We use a breathtaking technical innovation that has only been seen in a few major film productions so far.

But that is not all! In addition to big acts we have also invited some newcomers to present themselves at Wacken World Wide. The Wacken Foundation and the W:O:A Metal Battle let their muscles work.

In addition, there will be a whole series of additional concerts, freshly recorded for Wacken World Wide. Artists like Alice Cooper, Foreigner, Body Count, Rage or Eskimo Callboy have joined us to make you rock. The way they perform is different in each case, because every region of the world has different rules at the money. You can for example expect shows from legendary US clubs, from the inside of the earth and from the living rooms of the artists.

And that is still not all. In addition to all the new content, most of which has never been seen before, we’re also opening our vault. Look forward to some legendary W:O:A concerts!

All content and the schedule can be found on Wacken-World-Wide.com – the concerts start on Wednesday!

This year the motto is: See you in Wacken – Rain or Shine or Online!